With vacation too long and summer too strong, I wanted an escape from the banalities of everyday life.  So in order to break the monotony and rejuvenate our aching souls, my husband and I decided to visit the Hashemite Kingdom of Jordan. Teaming with another couple who is our family friend we decided to taste a slice of Jordanian life. And smitten by wanderlust we packed our bags to what I reckon were the best seven days of our Arabian life.

On a sunny 23rd  of June, which happened to be a Friday, the four of us started off from Jubail on a road trip to Jordan. As it takes 1599 km by road and close to 15 hrs of drive to Jordan, we halted at Al Qurrayat for the night.  Al Qurrayat is a small town near the  Saudi border, halting there was a perfect decision for it made the journey less tiring and bought us some time to explore Jordan with ease. So on the 24th, we geared up for our maiden tryst with Jordan. Getting some respite from the Abhaya and the warm welcoming of the security officers at the borders, doubled the thrill of the journey. We couldn’t help but be ecstatic as we drove towards the north of Jordan.

Overlooking the Jordan valley with all its rustic grandeur, Umm Qays is a historical site lush with Roman vestiges.  This ancient city was once a hub for several philosophers and classical poets to unleash their artistic exploits. We explored the ruined city by clicking pictures at the collonaded streets, mausoleums, Roman theatre and baths. I was awed, obviously, it was my first day, but for what I saw for the rest of my days in Jordan this place was slightly overrated. Done with Umm Qays, we left for Ajloun Castle. Built in 1184 A.D, Ajloun is an impeccable example of Islamic Architecture. The two floored castle houses artefacts and relics of the bygone era. The breathtaking view of Jordan through the castle window is what I loved the most about this castle. Famished and weary we called it a day and returned to Amman, the capital of Jordan. Amman is an intriguing city of contrasts. Albeit chic and modern, history echoes in the nook and cranny of Amman. We stayed downtown and the city looked even more beautiful. We spend the night shopping and saw the Citadel and the Roman Theatre from the outside.

Early next morning we took off to our adventure destinations:  Mount Nebo, Wadi Mujib and the Dead Sea. Technically, Wadi Mujib wasn’t a part of our itinerary. But, thanks to my constant pestering my hubby decided to include it in the list so that I would zip my mouth and he would get some peace.We started off to Mout Nebo before going to Wadi Mujib and spending the night at the dead sea. Mount Nebo, is more of a pilgrimage centre for it is believed to be the burial place of Moses. You get to see tombs, the mosaic floor of the church and the serpentine cross which overlooks the sea. The view from the serpentine cross is a sight to behold.  After spending some time there we left for Wadi Mujib. Driving through the picturesque valleys we reached Wadi Mujib at around 1 pm from Amman. It was Eid and the people there welcomed us with sweets.

Wadi Mujib  – a  spectacular river canyon that enters the dead sea is a must visit place if you are in for some adventure and thrill. It was a self-guided trek through the rocks and stones to reach the waterfall. We were provided with life jackets to wade through the waters.Initially, the water level was only ankle length but as we trekked further the water level increased.  Despite the bruises from the trekking, this was an astounding experience, truly-wholly! The pictures we took were in vain for the waters ensured the mobile to cease our narcissistic pleasures and rather enjoy the ethereal beauty of the canyon.

By the time we were done with Wadi Mujib, it was close to dusk and we had to rush to tick one off the bucket list – floating in the Dead Sea! We checked into Dead Sea Hotel and Spa to get awed by the wonders of nature. I have always been sceptical about the buoyancy of this sea. But all my doubts were put to rest once I floated peacefully. In fact, it was difficult to stand back on my feet after lying on this enchanting bed of water. Another highlight is the mud from the sea, known for its revitalising effects on the skin. We helped ourselves with the free mud and pampered our skin to our heart’s content. Needless to say, we helped ourselves further and packed some mud in bottles to take it back with us.

After floating on the dead sea, it was time for some desert safari. So we headed off to Wadi Rum also known as the Valley of the Moon.  This desert has been popularised by some Hollywood movies such as Lawrence of Arabia and Martian.  We checked into Hasan Zawaida Camp, one of the best camps among many in this desert. We had a welcoming host, Ali who took us for 2 hours drive through the sand. Though there are different packages based on time, we chose the one that saved time. At a glance, Wadi Rum looks like a maze of rocks, mountains and sand. But each mountain has a story to tell and we were all ears to our guide. Of the many seemingly-similar rocks I could only remember the Mother of twenty and the Lawrence Rock. We ended the safari after the sunset which was celestial. It was a romantic affair between the mountains and the sun, where the Sun kissed the mountains goodbye for the day.

I almost forgot to mention about the Bedouin tea, which is another highlight of the camp. Made from ingenious spices and herbs, the tea refreshes your mind. The tea is free and you will get it in copious amounts.  After the sand cooked dinner, we waltzed to some oriental music. The night was crazy and we were all in a trance. Besides we got to see the desert in the night, where we buried our feets into the cool sand and lied down to enjoy the beauty of the night sky – lit with stars.

A little about the tent:

Well, ours was a bath attached room with two beds. The tent was beautiful but not airy. Hence the night was horrible. The hot air remained trapped and it was like an oven inside. Though this happens only in the summers the winter is said to be too chilly.

A coastal city south of Jordan, Aqaba is famous mostly for its water sports. In ancient times this city served as the port and there are two forts here: Aqaba Fort and Castle of Saladin. We saw the former from outside as renovation works were going on, the latter was somewhere else so we skipped for we had other plans. At the fort, we met a half Turkish half Jordanian fellow who volunteered to be our guide. He just took us around and introduced us to Aqaba’s Anchor diving centre where we did our first maiden Scuba diving. This was my scuba and I had loads of apprehensions but thanks to my instructors they made scuba a breeze.  We changed into our diving wears and headed off to the red sea for some underwater thrills.

We were accompanied by Nick, Mohammed and Ahmed who were such splendid instructors.  They taught us the sign language, gave some instructions and took us down. My husband and I were led by Nick, Ahmed was the photographer for the day. The water was cold and clear which made the dive great. Some few meters down I had problems with equalising and I came up. Obviously, I was disheartened and a tad jealous that I couldn’t complete it. And poor Ahmed had to be with me. Mustering my courage I asked Ahmed if he can take me down one more time. He politely agreed and once again I went down to see the exotic world underneath. This time I was better and completed the dive. It was 4 pm by the time we finished our dive and we were famished. After some late lunch, we headed out to Petra – the lost city!

Tired from scuba we decided to trek Petra the next day. Listed among the Seven Wonders of the World, Petra reeks of history and is shrouded in mysteries!  We started at 7 am to explore the ruins of the lost city. With its ingenious designs dating back to 2000 years, Petra is an architectural marvel.  With our maps in hand, it was easy to trek Petra. There are different trails you can take: Main trail, High Place of Sacrifice Trail, Monastery Trail and the like. We took all the three and it was one hell of a walk! Walking through canyons you reach the Treasury, one of the most magnificent architectures of the Nabateans. The Treasury is also noted for featuring in the movie Indiana Jones. Further up, we took the trail to High Place of Sacrifice.

It was a hard trek and was amused to see how the Bedouins climb it with ease. Rustic life Vs City life, you see! For those who can’t walk worry not for there are plenty of horses, camels and donkeys to do the walking and climbing. We also climbed 900 steps to the Monastery which again was an exhaustive climb.  Apart from being a lost city, Petra is also the city of the dead for one part of this place is replete with tombs: tombs for soldiers, palace tombs, silk tombs, urn tombs, unfinished tombs, etc. The Roman influences were seen in the collonaded streets, theatre and the great temple. What is intriguing about Petra is its architecture! To think all the monuments were carved out from rock so high leaves you awed at the mystery architects of the by- gone time.

Ancient architecture once again proves to be on par with modern! It took us 7 hours to cover Petra yet lusting for more we decided to visit her in the night.  So there she was basking in her glory, with thousands of candles lit to brighten her might. Petra by Night is a walk from the Siq Trail to the Treasury to witness the awe-inspiring beauty of the Petra by indulging in some traditional music, tea and a story! Tired from the day, sleep invaded us and we hit the bed early.

Next day, we packed our bags and headed back to Amman for our return to Saudi. So with a heavy heart, we reached Amman and explored Jerash. Well, after seeing Petra Jerash was nothing! Nevertheless, we walked around these Roman remnants exploring the theatres, collonaded streets, temples, cathedral, and the Hippodrome. Next day after breakfast we bid adieu to this beautiful city and people. From sauntering through the Roman vestiges at Umm Qays to scuba diving in Aqaba, we enjoyed the whole of Jordan in seven exhilarating days.

The Pain of Similarity 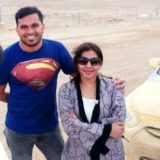